During the summer of 2016, my daughter developed a severe case of eczema. Her arms, belly, and legs bore the large

brunt of it. Patches would flare up, becoming dry, itchy and often scab over. She would scratch and pick, then it would eventually heal after leaving a light patch on her beautiful caramel skin. (I’m biased. Also jealous. He he he)

For months we consulted doctors and specialists, tried an elimination diet, removed every possible irritant, and I diligently recorded it all looking for patterns of ANY kind. One doctor suggested that it was originally triggered by swimming in chlorine pools and the salt water ocean, so we avoided swimming all-together and limited bath time too.

To say my daughter was miserable, would be an understatement. Plus, she was fielding questions from her friends such as, “why are you spotted?” and “are you sick?” It was quite the blow to her fragile second-grade ego, but she took it like a champ. We learned everything we could about eczema and she began talking about it to everyone! 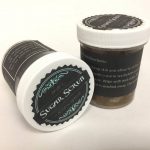 Christmas time rolled around (the eczema battle was still raging on) and we decided to make DIY Beauty Products to give our friends and family for gifts. One of the recipes we made was a Lemongrass Ginger Sugar Scrub. We infused soy and hemp oil with fresh ginger root and added Lemongrass essential oil to the other ingredients.

After the craziness of the holidays, when things started to go back to normal, we encountered an unusually bad breakout. As my eyes swept across the numerous products (weapons) we had accumulated to battle the eczema that had taken over our lives, they stopped on the box of left-over Christmas gifts. A-HA! Let’s trade in the homemade goats’ milk soap (yes, we even met the goats that supplied the milk!) for some of the Lemongrass Ginger Sugar Scrub we made!

My daughter HATED it! The texture of the sugar scrub as I rubbed it on her skin bothered her to no end. However, we were desperate – so I convinced her to roll with it a couple of times, just to see if it would make a difference. We washed her eczema patches with the Lemongrass Ginger Sugar Scrub once a week during the major breakout and started to see a vast improvement!

After the first two applications, we reduced our use to once every two weeks. This was mainly because my daughter complained so much about the texture. But a few months later, the eczema patches had disappeared and all that remained was the light patches of healing skin.

I’m happy to report, that as of today, the day I’m writing this article, we – knock on wood – have not had another major breakout and my daughter is spot-free! YAY! That’s a big win in my book!

That’s not all! A friend had mentioned that her husband suffered with (what they think was) eczema on the majority of his face. I sent her a sample and the recipe we used for her to try. This is what she says… 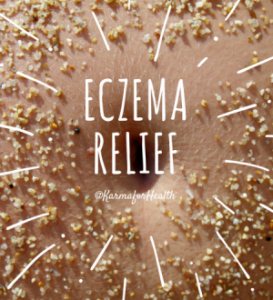 “About six months ago, I was talking to Tracy, about issues my husband was having with the skin on his face. We *think* it’s eczema, but aren’t really certain.
So Tracy sweetly sent us a sample of a scrub (Ginger & Lemongrass Sugar Scrub).
My husband is quite a skeptic, but after my gentle pushing (read: nagging). He tried it. And admitted he thought it may have helped. So he has continued to use it, on a weekly basis. And it’s definitely helping! The redness that covered 90% of his face has been reduced to a quarter- sized area on his cheeks. What a huge difference! We have spent hundreds of dollars on dermatologist appointments and medications. Nothing helped. Until now! :)”

Do you want to try it too? You can get some here…. Lemongrass Ginger Sugar Scrub